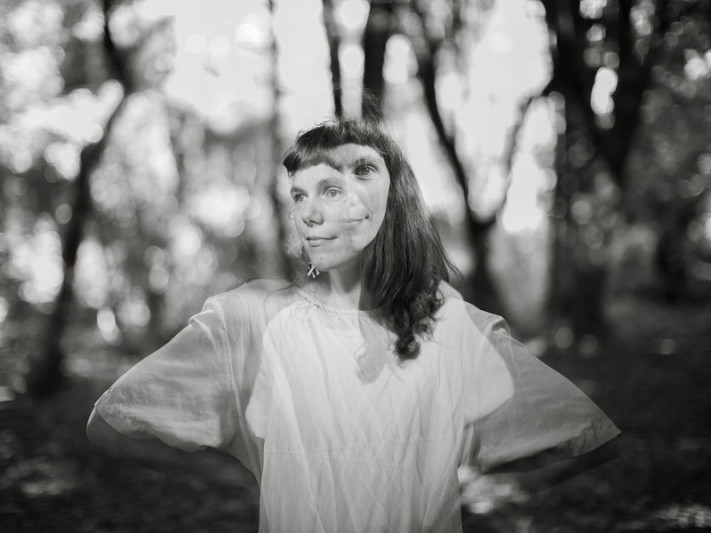 This event was postponed from the summer. Please note the new date: Sunday 28th March 2021.

“…one of the most talented, wise, prolific and important women of our times" Kate Stables of This is the Kit

Contemporary folk multi-instrumentalist Rachael Dadd is on a strong path with so much interest and support from DJs, tastemakers, her contemporaries and key people in the music industry. She has been gaining the reputation as a pioneering and thought-provoking artist unafraid to push the boundaries of folk and pop.

Living half her time as a traveling musician in Japan, witnessing how other people create things, connecting with other cultures and landscapes; all this is a furnace for innovative song writing.

Rachael Dadd released her 6th album, Flux, on Memphis Industries in November 2019. Flux is a response to external and internal tides: the flow of life up-rooted; a protest against the flow of recent political history; a diary of the flow within the intimate space of home. Collaborators include multi-instrumentalist Emma Gatrill (Willie Mason / Matthew and the Atlas), drummer Rob Pemberton (Emily Barker / Low Chimes), bassist Jim Barr (Portishead) and vocalists Kate Stables and Rozi Plain (This is The Kit). Flux follows Rachael’s highly acclaimed album We Resonate which came out on French label Talitres and Sweetdreams Press (Japan), and a string of releases on Broken Sound (UK), Lost Map (UK), Sweetdreams Press and Angel’s Egg (Japan). She has received wide support from DJs on BBC 6 Music, BBC Radio 1, BBC Radio 2, BBC Radio 3 Late Junction, BBC radio 4, Xfm, France Musique on which she was invited for a 6 song session.

“Experimental folk multi-instrumentalist Dadd is one of the quirkiest singer songwriters on earth but she`s also one of the best....a richly eclectic sonic treat.” - HIFI NEWS 9/10

In 2016 her solo Piano and Projection show received an Emerging Excellence Award. She has toured this formation as well as full band and solo across venues and festivals in the UK, Europe, Australia and Asia. Her countless festival performances include End of the Road (Tipi stage), Green Man (Cinema tent), Glastonbury, Truck, Farmest, Wilderness, Le Festival Les Femmes s'en Mêlent (France), Mandrea Festival (Italy), Woodford (Australia), Women in (E)Motion (Germany), and so many more. Headline tours include twice around the UK, once in Europe and most years in Japan since 2008. Rachael regularly tours with long-time friends and collaborators This is the Kit and Rozi Plain, as well as David Thomas Broughton, Francois and the Atlas Mountains and Alessi`s Ark.

In Japan Rachael has written for some top names such as UA and Gontiti, and performed to an audience of 4000 at Tokyo’s famous NHK Hall. With a First in fine art, Rachael puts great attention into the conceptual and visual through her music videos, album artwork, hand-made merchandise and exhibitions.


“Contender for best of the year lists….you never know what she’s going to do next” - Lauren Laverne

“Delicate, thoughtful and precise... one of the most fascinating female talents we’ve come across” - For Folks Sake

“....colourful melodies over ultra-percussive weird folk, full of clicks, twangs and rasping; it's playful and profound, with a magnetic pull. ” - SoundsXP

“Breaks the conventions of pop to reassemble a sound of raw, jagged beauty.” - AESTHETICA

“Whistful and wonderful, We Resonate emphasizes how magical freak folk can be.” - DIVA

“Rachael Dadd is a musician and textile artist who creates surprisingly accessible poly-rhythmic, acoustic art-pop; utilising voice, ukulele, prepared piano, clarinet, and a plethora of percussive objects both musical and mundane. An intriguing and really rather lovely record.” - fROOTS

“...effortlessly authentic/heartfelt songwriting & next level far out musicianship. A true artist. With every LP her life experience possesses and enchants her music, stirring further its ever inspiring melting-pot of ideas.” - Julian Peck, Sunday Best

“...one of those melodies that just won't let loose and is completely addictive, wistfully floating along.” - Louder Than War

“Rachael Dadd is our most celebrated female artist on Folk Radio UK.” - FRUK

“Creating a truly unique sound is no mean feat, but Rachael Dadd is someone who is managing it beautifully.” GOLDFLAKEPAINT

“Beautiful voice, intelligent songs and ability to transform a huge venue into an intimate space mark her out as a singular talent.” - FRUK

“Inspiring, spellbinding and most importantly an excellent example of accomplished penmanship.” - THE LINE OF BEST FIT

“The true star of a stage positively brimming with quality. Authentic, unpretentious and lightened by Ms Dadd's loveable persona” - VENUE