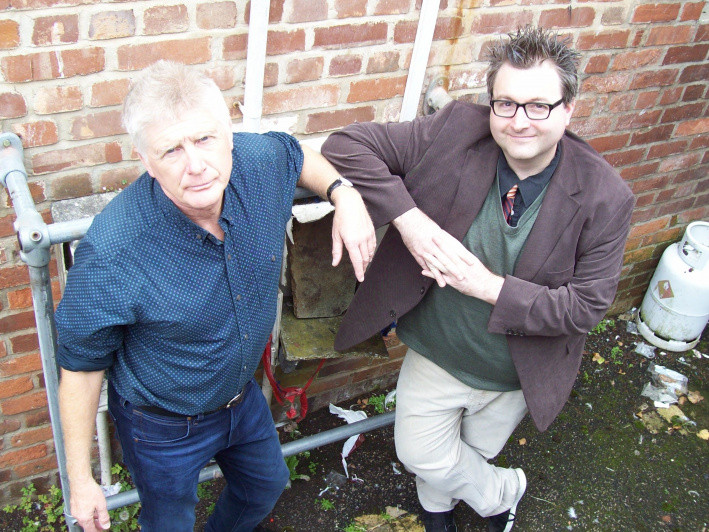 Comedy Night with The Two Robbies

Rob Barratt and Robert Garnham are proud to announce that they will be bringing their comedy show The Two Robbies to The Old Library in March.

Rob Barratt is a Dudley-born and Cornwall-based comic poet, humourist and singer. Comedy fans may remember Rob from his solo performance in January 2019 at The Old Library's fundraising launch, or from his excellent sell-out show 'Comedy Night with Holcolmb, Barratt and Richey' at The Old Library in 2019.

Rob's brain-tickling, word-mangling performance combines clever word play, verse and song with satire, parody and audience participation. Rob deals with such important topics as squid, data-driven education, Neanderthal politics, the weather in Scotland, distressed furniture and tuk-tuks. In recent years Rob has appeared at folk, literature and arts festivals all over the UK and in Australia.

“His head is well and truly located in ‘Planet Barratt’, clearly a place of wonderfully bizarre inspiration” (Coventry Telegraph)

“One of the funniest performers yet. His audience was with him from the moment he began“ (Write Angle, Petersfield)

Robert Garnham is a comedy spoken word artist, originally from Surrey. His whimsy- driven poems are off-beat, high energy and hilariously deadpan, looking at everything from badgers who want to be in soap operas, a love affair with a Muppet, to loading the dishwasher with a famous opera singer. He's a multiple slam champion and twice long-listed as Spoken Word Artist of the Yeat. He recently headlined at The Duplex Cabaret in New York and the King Kong Klub in Berlin, and has been featured on a TV advert for a Building Society. A joke from his show 'Juicy' was mentioned in the Guardian, Times, Telegraph and Radio Five Live as one of the best at the 2017 Edinburgh Fringe.

"An excellent poet with an inimitable voice and a nice smile". (Matt Harvey).

Please note: This show is recommended for ages 16+

The Ola Cafe will be open for pre-show tapas (advanced booking only) and the bar will be open throughout! Find out more at https://www.intobodmin.co.uk/ola-cafe, or find Ola Cafe on Facebook.

Your ticket: Please note, once you have booked you do not need to print your ticket or proof of purchase, simply give us your name on the door. This saves paper, time and money!