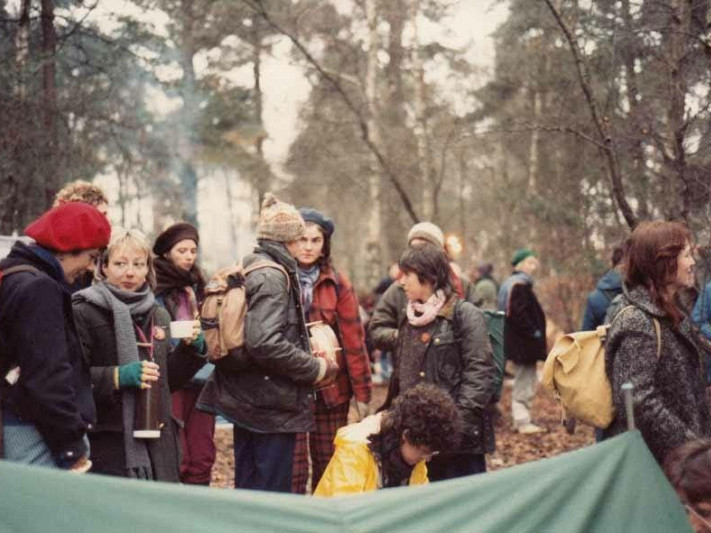 'A woman with bolt cutters stands at the fence on the common and smiles at a solider on the other side in the Greenham military base; “Don't worry,” she says, “We'll soon get you out of there!”'

Based on fresh, original testimonies given by over 100 Greenham Common Women, this talk offers an intimate portrait of the adventures, personalities and dilemmas of the Greenham Women, exploring how Greenham's legacy has influenced current cultural, and political movements including Repeal The 8th, Extinction Revolution, the Stanstead 15 and the MeToo movement.

Rebecca Mordan, Artistic Director of Scary Little Girls Association and co-ordinator of this unique Heritage Lottery funded project has led an interview process involving approx 100 Women of Greenham Common peace camp. In this talk she explains the work and shares anecdotes from these extraordinary campaigners, finishing the eveing with a Q and A session when Rebecca will be joined by local Greenham Women who have contributed to the Greenham Women Everywhere project.

Rebecca is an actor, activist and co-curator of the Heritage Lottery funded archive project and is a Greenham child. Her close relationship with the women she has interviewed has resulted in a wealth of intimate revelations and accounts. She founded and is Artistic Director of feminist production hub Scary Little Girls, is a compere for Glastonbury Festival and a regular speaking head for BBC regional radio, LBC and Sky News.

Greenham Women Everywhere is a partnership project between Scary Little Girls Association and the Heroine Collective, funded by The Heritage Lottery Fund, South West and supported by The University of the West of England in Bristol, Cornwall Council, Falmouth University, The Women’s Library at The London School of Economics, The East End Women’s Museum, Goldsmiths Unversity of London, The Hypatia Trust, The Feminist Library, The UK Parliament Vote 100 Project and Dreadnought South West.

While there is no recommended age restriction, please note that this show contains mild adult language and themes.