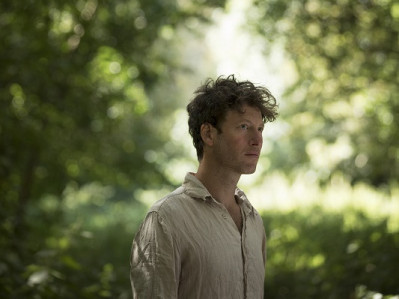 Sam Lee plays a unique role in the British music scene, breaking the boundaries between folk and contemporary music and the assumed place and way folksong is heard.

Alongside his organisation The Nest Collective and fellow collaborators, Sam has shaken up the live music scene, and injected a renewed passion into old material, helping to develop its ecosystem by not only inviting in a new listenership but also interrogating what the messages in these old songs hold for us today.

His forthcoming album, Old Wow is a truly compelling and emotional album that takes his work to yet another level. When he released his first album ‘Ground Of Its Own’ in 2012, he dared to dramatically re-work old songs by matching his direct and rich singing style against an extraordinary backdrop of sound, making use of anything from Jews harps, trumpets, fiddles, banjo or the drone effects of an Indian Shruti box. This bravely original set made possible by a prestigious Arts Foundation award, set up to ‘support artists at a breakthrough moment in their careers’ made an immediate impact and the album was shortlisted for a Mercury Music Prize.

Sam’s second album ‘The Fade In Time’ saw him break further new ground and receive accompanying accolades including a Songlines Award for artist of the year. This time the backing included cello, ukulele, Japanese koto, willow flute, and, most startling of all, an exquisite acapella treatment of Lovely Molly backed by the massed ranks of the Roundhouse Choir. This song received much attention being performed at the 2016 BBC Radio 2 Folk Awards at London’s Royal Albert Hall winning Best Traditional Track and subsequently performed on BBC TV’s ‘Later with Jools’, NPR's Tiny Desk sessions and in 2018 with the BBC Symphony Orchestra at the Proms where Sam hosted a Folk Prom alongside Julie Fowlis. But possibly the largest audience Sam found himself being heard by was when Guy Ritchie chose him to write the lead song for his epic Hollywood fantasy King Arthur: Legend of the Sword from which ‘The Devil and The Huntsman’ was born receiving tens of millions of plays internationally.

And now comes ‘Old Wow’, yet another dramatic change of musical direction. It’s a thoughtful, soaring and moving set of songs, dominated by Sam’s soulful and sensitive vocals and no cliché in saying it’s his most assured recording to date.

'Old Wow' is devoted to his love and passion for the natural world; a commitment that has dominated Sam’s heart and non-musical practice for many more years than he’s been singing. ‘Old Wow’ has become for Sam an epithet to that quality innate within nature to create wonder and connection. Many of the album songs deal with that beauty and importance of nature, our wounded relationship to her and the threats brought by the ecological crisis we are just waking up to. With lyrics to traditional songs often re-written or “re-imagined with new relevance for today” Sam has distilled out of these old songs “a new potency and communique, through polished up old wisdoms almost lost, now with a renewed sense of heart and orientation”.

Sam is an avid collector of traditional songs, spending time seeking out the elders of the Gypsy Traveller community recording thousands of songs in England and Ireland from the last generation to sing this repertoire. Sam set out through his own albums to “highlight the beauty of these songs through unusual and contemporary settings”.

Sam is best known for his unique re-interpretation of traditional songs but is also involved in a staggering array of other projects. As an entrepreneur, he has created new and unusual avenues for a vast range of acoustic musicians via The Nest Collective and its associated events such as the Campfire Club, the Unamplifire festival, his political & social justice singing Fire Choir and more. As a broadcaster, he has presented several acclaimed BBC radio documentaries about music in the UK and beyond. Sam has now appeared on stages, festivals, conferences, and gatherings in virtually every corner of the globe singing lecturing and generally being a storyteller and advocate for the things he loves.

As a campaigner, Sam has used music to promote his love of the natural world in a typically bold and unexpected way. His annual sell-out ‘Singing With Nightingales’ immersive experiences now take place across the South-East every spring for 6 weeks and have helped to highlight through song and artistic means the threat to these and other endangered species. He played a key role in the RSPB 2019 campaign to highlight this issue with ‘Let Nature Sing’ a recording Sam composed entirely of bird song which made it to the top 20 in the UK music charts. Sam is also a founding member of the organisation Music Declares Emergency, in which the UK music industry is convening to acknowledge and address how it can combat the climate and ecological crisis. His close involvement with Extinction Rebellion led to a memorable finale to their two-week ‘International Rebellion’ in April 2019. Thanks to Sam, nightingales really could be heard in Berkeley Square, at least for one night, as he led a 1500 strong crowd for an evening celebrating the uprising and bring the awareness back to the endangered species and the environment. It culminated in the communal singing of his revised version of ‘A Nightingale Sang in Berkley Square’ while the bird’s song was streamed through everyone's mobile phones in a scene reminiscent of that great musical eco-warrior who went before, Pete Seeger.

Yes, Sam plays a unique role in the British music scene.  And now, with Old Wow he has re-worked traditional songs to create what he describes as “a timeless bridge, music that can be looking both backward and forwards, and a soulful accompaniment to an urgent need to fall back in love with nature if we are to know how to protect it”.

ABOUT THE ST PETROC'S SESSIONS

The St Petroc’s Sessions are a series of concerts offering a rare opportunity to enjoy live music and entertainment in the beautiful setting of Cornwall’s largest church, St Petroc’s in Bodmin, which dates from the 15th Century. Expect big-name headliners and a platform for local talent.

Organised by intoBodmin and Devon-based promoters Cabaret Voltaire, the St Petroc’s Sessions launched in September 2017 at the Celebrate Bodmin Festival. They have so far featured acts such as This is The Kit, Fairport Convention and The Cuban Brothers. Featuring talent both home-grown to Bodmin, and from across the South West – there’s big names and the best emerging talent.

Once you've got your tickets, here is some useful information about the events:

Tickets: The name of the ticket buyer will be on the door, so give us your name and if it’s on the list, then we'll let you in. Please bring some proof of ID.

Food and drink: You can't bring your own drinks and food into the venue. There will be a bar but please bring cash as we can’t take card payments.

Parking: There is no parking at the Church, but there are three car parks within a two or three minute walk. They are all free after 4pm. Priory Car Park is the closest.

Usual Timings: We usually open the church at 7pm, and the gig will usually finish by 11:30pm.

Access: If you have difficulty with steps, please get in touch. There is level access to the venue, but it would be handy if we know in advance.

Children: under 18's are allowed at this event, but please ensure under 16's are accompanied by a resonsible adult. We reccomend ear defenders for young children, and please note that there is alcohol on sale in the venue.

Anything else: St Petroc’s is a large 15th Century Church. It’s a beautiful venue, but it can be a bit chilly, so dress appropriately. There are no pews, if a seated event the chairs are cushioned, if standing chairs are available. Please note there are pillars. While you'll always be able to stand at the sides and back for a better view, if you want to make sure you have good sight lines from a seated position, we advise arriving promptly.

If you have any other questions, emailus@intobodmin.co.uk or message via our social media channels @intoBodmin.