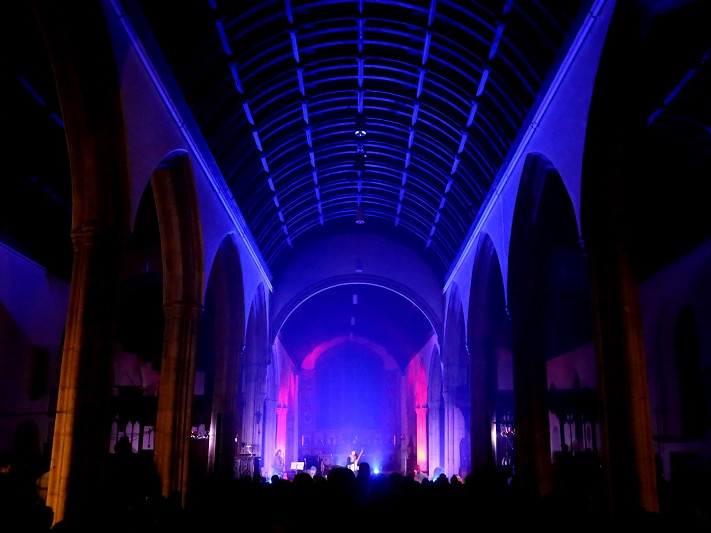 Benjamin Francis Leftwich has announced an intimate UK tour, which will see him play in venues he hasn't before around the country. We’re thrilled to announce that he’ll be performing in Bodmin as one of our St Petrocs Sessions, organised by intobodmin and Cabaret Voltaire.

'Elephant' is the first piece of material to surface since his acclaimed album 'Gratitute', released earlier this year, and is taken from a forthcoming EP due this autumn on Dirty Hit.

Where 'Gratitude' saw Ben embrace more electronic elements and bring darker production nuances into play, 'Elephant' takes him back to his roots, as those signature hushed vocals impact over an ethereal choir backdrop and delicate guitars.

Speaking about 'Elephant', Ben said: “For me, this song is about re-connecting with personal history and unresolved sadness through a clearer and more compassionate lens than was looked through before. I have always loved elephants for their strength, beauty and unique nature, and so using the idiom of an ‘elephant in the room’ felt right in writing about the past from a kinder and calmer perspective.

I think this song is an observation on re-engaging with past trauma for growth, rather than seeing it as something to ignore and pretend isn’t there, or never even happened.”

Don't miss Ben at the St Petroc's Sessions in September, as part of his newly announced intimate UK tour.

We are excited to announce that Sam Garrett will be supporting Benjamin Francis Leftwich. Sam is an English singer songwriter who has been creating and singing heartfelt melodies since his teens. Lyrically soulful, and talented, Sam's music uplifts and inspires.

Follow him on social media at Sam Garrett Music.

ABOUT THE ST PETROC'S SESSIONS

The St Petroc’s Sessions are a series of concerts offering a rare opportunity to enjoy live music and entertainment in the beautiful setting of Cornwall’s largest church, St Petroc’s in Bodmin, which dates from the 15th Century. Expect big-name headliners and a platform for local talent.

Organised by intoBodmin and Devon-based promoters Cabaret Voltaire, the St Petroc’s Sessions launched in September 2017 at the Celebrate Bodmin Festival. They have so far featured acts such as This is The Kit, Fairport Convention and The Cuban Brothers. Featuring talent both home-grown to Bodmin, and from across the South West – there’s big names and the best emerging talent.

Once you've got your tickets, here is some useful information about the events:

Tickets: The name of the ticket buyer will be on the door, so give us your name and if it’s on the list, then we'll let you in. Please bring some proof of ID.

Food and drink: You can't bring your own drinks and food into the venue. There will be a bar but please bring cash as we can’t take card payments.

Parking: There is no parking at the Church, but there are three car parks within a two or three minute walk. They are all free after 4pm. Priory Car Park is the closest.

Usual Timings: We will open the church at 8pm, and the gig will usually finish by 11:30pm.

Access: If you have difficulty with steps, please get in touch. There is level access to the venue, but it would be handy if we know in advance.

Children: under 18's are allowed at this event, but please ensure under 16's are accompanied by a resonsible adult. We reccomend ear defenders for young children, and please note that there is alcohol on sale in the venue.

Anything else: St Petroc’s is a large 15th Century Church. It’s a beautiful venue, but it can be a bit chilly, so dress appropriately. There are no pews, if a seated event the chairs are cushioned, if standing chairs are available. Please note there are pillars. While you'll always be able to stand at the sides and back for a better view, if you want to make sure you have good sight lines from a seated position, we advise arriving promptly.

If you have any other questions, emailus@intobodmin.co.uk or message via our social media channels @intoBodmin.